His Royal Highness Mohammed bin Salman bin Abdulaziz, Crown Prince and Chairman of the Neom Company Board of Directors has declared the establishment of Oxagon, the world’s first fully-integrated port and supply chain ecosystem for Neom. 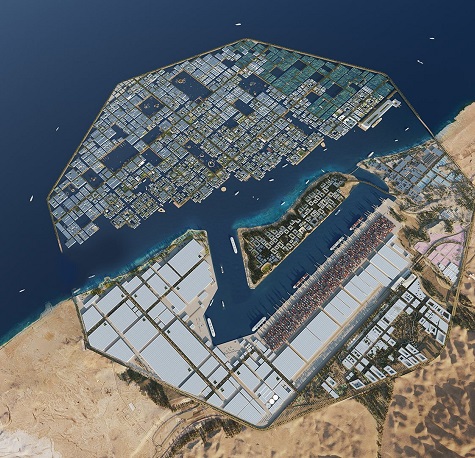 Oxagon will form the next phase of Neom’s master plan, representing a radical new model for future manufacturing centers, based on Neom’s strategies of redefining the way humanity lives and works in the future. The complex is set to be 33 times the size of New York City located in the kingdom’s northwest region. Being the one of the world’s busiest trade routes, the Red Sea has over 10% of all global trade passing through each year.

"Oxagon will be the catalyst for economic growth and diversity in Neom and the kingdom, further meeting our ambitions under Vision 2030," Prince Mohammed, said in a statement.

"It will contribute to Saudi Arabia’s regional trade and commerce, and support creating a new focal point for global trade flows," he said. "I am pleased to see that business and development have started on the ground and we look forward to the city’s rapid expansion."

The plan for Oxagon is to be a net zero city fully powered by clean energy. Neom will also expand a tiny local anchor port into a trade and manufacturing hub near the Suez Canal. This port will anchor the industrial city of Oxagon.

Neom is the crown jewel of Prince Mohammed bin Salman’s programme to overhaul the economy of the world’s largest oil exporter. His plan to turn the remote region on the kingdom’s northwest coast into a robot-driven tech hub encapsulates the major elements of his Vision 2030 initiative to diversify away from crude and boost investment.

The first phase of construction, until 2025, will focus on the segment to be built on land, he said, with the floating area still in the “early phases of design".

Interested to position yourself in this fast-growing market? Join INDEX Saudi Arabia, taking place 6 - 8 September 2022 in Riyadh. Enquire about exhibiting.